Montevideo, 23 November 2011 (ACTRAV INFO) – Following a seminar held in Montevideo on 22-23 November 2011, trade unions of Latin America are committed to strengthen their cooperation on multinational enterprises at the confederal and sectoral levels.

The seminar participants drew up a road map that enabled the unions to exchange experience on multinationals. “We worked on the multinationals of Latin America, creating a reference framework, a roadmap for 2012.The aim was to collect information on collective bargaining with multinationals, to know what investments they are making and in what direct financing they are engaged in these countries. The participants decided to set up a database on freedom of association cases linked to multinationals, in order to make use of ILO rulings.” explains ACTRAV Deputy Director Anna Biondi who took part in the seminar, which brought together a number of trade union organizations from Europe and Latin America.

ACTRAV plans a programme in the field to follow up on the seminar's conclusions. After Africa and Latin America, similar activities on multinationals are scheduled for Europe, Asia and the Arab countries. “Over the next two years, similar activities are planned in other regions of Europe and Asia, notably India and China,” the ACTRAV Deputy Director says. “For those events, the ILO Declaration on Multinational Enterprises, which is already available, will be translated into Russian, Tamil, Arabic and Chinese.” added Ms Biondi.

At the close of the Montevideo seminar, the participants raised the possibility of inter-regional cooperation. “Links are envisaged between the Trade Union Confederation of the Americas (TUCA-CSA) and the European Trade Union Confederation in order to strengthen trade union cooperation at the level of the European firms present in Latin America and the Latin American firms that set up shop in Europe,” Anna Biondi said. “There are already agreements within the European multinational enterprises and we're going to try and extend them to Latin America. Contacts will also be established between unions at the sectoral level.” concluded the Deputy Director of ACTRAV.

See the conclusions of the Montevideo seminar … 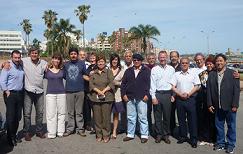