ACTRAV INFO: Looking back at 2014, what are the main achievements of the international trade union movement and which areas need improvement?

Sharan Burrow: The global economic environment remained very hostile for working people. The global economy is still not fixed, with unemployment still above the level at the start of the global financial crisis, and hundreds of millions of workers without jobs or social protection. Democratic space is being limited in more and more countries, and the level of trust in governments and institutions is lower than at any time in recent history.

Against this background, the ITUC Congress in May in Berlin focused on equipping the trade union movement for these challenges. The Congress, which was structured in a highly innovative and participative way, approved work plans in three key areas:Union growth is essential if we are to be able to re-shape the world in a way which delivers social and economic justice. The ITUC Organising Academy, which trained over 500 people up to the end of the year, is a key element in supporting union growth. We are now seeing the alumni of the Academy, many of them young people and many women, taking up organising work in every region, using the skills and expertise that the Academy programme has helped them build. Organising is central to everything the ITUC does, and in 2014 a lot of effort went into building organising targets and strategies into our activities, with affiliates and with Global Union Federations, right across the scope of our work.

On sustainable jobs, secure incomes and social protection, we made real progress last year, although there is still a lot to do. We are seeing recognition of our demands in the international processes such as the UN Post-2015 objectives, and have built strong alliances with others working on economic justice and development issues.
A key part of this has been reinforcing the activities of workers in the informal economy to organise into unions and start formalising their jobs. This is a huge task, but we also know that these workers want to organise for dignity and rights at work, and we are there to help them.

We have also made a lot of progress on sustainable jobs. Climate change is a massive challenge for everyone on the planet. We have yet to see the necessary foresight and commitment from enough governments, but our agenda of just transition and job creation from moving to a low-carbon economy is becoming deeply embedded.
Realising rights is a constant challenge for the trade union movement throughout history. We have established a “watch list” of countries, and within that a list of priority countries where the threats to workers and workers’ rights are the greatest. That enables us to focus on solidarity where it is most needed, while at the same time maintaining our campaigning for workers’ rights everywhere.

We have boosted our legal work, and in 2014 began to build a global network of lawyers ready to intervene and defend rights at work. Publication of our global index is also adding to pressure for reform in a range of countries. We have also had success in pushing forward unionisation and rights for domestic workers, and have real momentum through our “Count Us In” programme to boost women’s representation within unions and thus in the labour market.

Our campaign against modern slavery has resonated across the world, with the scandal of the kafala system in the Gulf, and particularly Qatar with the 2022 World Cup. Qatar’s rulers have still not moved to respect fundamental labour rights and neither has FIFA, but the pressure is on and it is extremely strong. On a positive note, the International Olympic Committee has taken important leadership on workers’ rights and sporting events, with host cities bidding for future Olympics now having to show how they will ensure labour rights will be respected.

A key achievement was the establishment in 2014 of the new sub-regional structure for the Arab countries, the ATUC. Genuine and democratic trade unions in the region, which is rife with violations of workers’ rights, now have their own structure, while retaining their engagement with the existing ITUC Regional Organisations for Africa and Asia-Pacific.

In the end, it is the work of our affiliates, global union federations and trade unionists everywhere that can make our agenda successful, and I would like to pay tribute to the dedication and determination of so many people, in every corner of the world, to equality and justice for working people.

ACTRAV INFO: You are re-elected General Secretary of ITUC. What are your main challenges for this new mandate?

We have set three “frontlines” of action, arising from our Congress and our December General Council meeting:The groundwork we have laid in the past couple of years on women’s rights, migration, jobs for young people, worker’s rights, development and the other core issues will be developed through our strategic framework, and we’re also planning to step up work on occupational health and safety. An ambitious agenda, which can work with the engagement and support of unionists at the regional and national levels.

ACTRAV INFO: In 2015, the dispute with the employers on the right to strike will be at the centre of discussions in the ILO. What are your expectations regarding this discussion?

It is astounding that employers at the ILO want to try and undo decades of accepted legal jurisprudence, and their intransigent position undermines the ILO as a whole. If the employers continue to dispute the accepted jurisprudence of the ILO, then the issue must be referred to the International Court of Justice. Taking away the right to strike would turn all workers into slaves. We will continue to defend the ILO, and defending the right to strike is absolutely central to that.

ACTRAV INFO: The ILO will launch a debate on Global Supply Chains in 2016. How do you envisage the preparation of the trade unions’ input to this discussion?

We are putting a very strong effort into this. Supply chains today are for many millions of workers synonymous with exploitation, precarious and informal work, and even forced labour. Many workers come to work each day somewhere in a supply chain at risk to their lives. We are building up our research work, documentation and policy preparations for the ILO discussion, but we are also not waiting until 2016 to tackle this issue. Supply chains will be at the heart of our actions in 2015, as we support workers’ efforts to get union representation, decent work, fair wages and safe and healthy working conditions. Today, supply chains deliver only poverty wages to tens of thousands of households, keeping many families below the United Nations’s severe poverty line. That has to change and we are determined to change it. 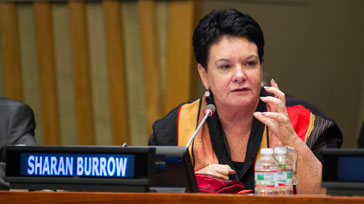 Challenges and opportunities for trade unions in 2014

Luc Cortebeeck, Chair of the Workers’ Group: “Either we recognise that ILO Convention No. 87 covers the right to strike, or we refer the dispute to the International Court of Justice”
Skip to top