On 8 June 1949 the International Labour Conference adopted Convention No. 98 in San Francisco. Hence, it will be 60 years old in 2009. It will be most appropriate for the Bureau of Workers’ Activities and the Workers’ group to celebrate the anniversary of a Convention which not only establishes the right of a trade union to exist but also defines its essence and raison d’être – collective bargaining. 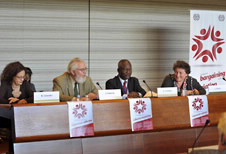 In recent years, the right to organize and to bargain collectively has faced the challenges stemming from falling trade union membership, increasing individualization of labour relations and the difficult quest for greater competitiveness and flexibility in the context of globalization. In the circumstances, the capacity of trade unions need to be strengthened in order to face these challenges and enhance the right to organize and collective bargaining and other fundamental rights and principles such as the global platform rules governing the increasing globalization of the economy and the promotion of decent work for all.

Participants will be trade union representatives as well as experts.